On 1 December 2018, Iceland celebrated the centenary of its status as a sovereign state. In the autumn of 1918 an agreement with Denmark was reached, the Union Treaty Bill, later ratified by parliament and a popular vote. Iceland and Denmark still shared a king and initially Denmark continued to handle foreign affairs. Yet as Spanish flu raged and in the coldest winter in its history, Iceland Iceland became a free and sovereign nation for the first time since 1262.

On 5 December, scholars and writers from UCD Dublin and University of Iceland commemorated this momentous event in Icelandic history with a series of talks at the Royal Irish Academy in Dublin. The event – Celebrating a Century of Icelandic Sovereignty: History, culture and Irish connections – was organised as part of the project Cultural Memory and Contemporary Europe: Ireland, Iceland and the Atlantic Periphery, a collaboration between UCD and University of Iceland. 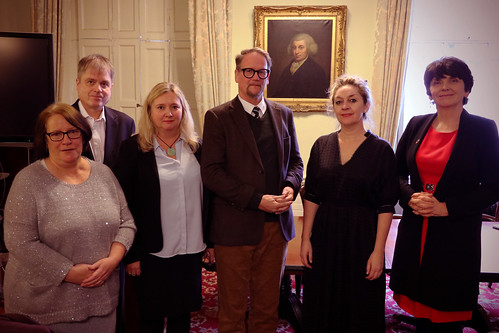 The event, which was recorded for podcasting by Real Smart Media, featured: